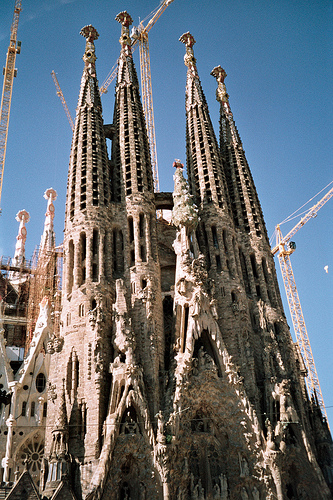 Yes, that’s probably dreadful Spanish and grammatically incorrect, but the sentiment remains. Barcelona: I love you.

I’ve been lucky enough to go there fairly regularly for the past four years or so to play at the Guilty Pleasures residency at Razzmatazz. It’s not a bad life is it?

Each time I try to extend the trip by a day or so, in order to go and see things and generally gorge on the ACENESS of the place. There’s so much to do, to see, to eat, it really is lo mejor. That was some more Spanish for you. Just throwing it in there. Bi-lingual me you know…

Anyway, here are some of my favourite things about Barcelona (aside from the oft reported top hotspots such as The Sagrada Familia and the Gaudi architecture bonkers-fest, the beach, Miro sculptures and artwork EVERYWHERE, the Gothic quarter, Picasso and that, hot Spanish boys with curly hair etc) accompanied by pictures to make it more aesthetically pleasing than a load of my scrawl. 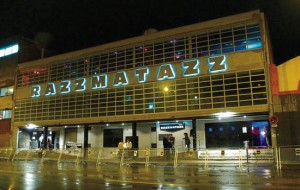 The reason why I get to go there so often and why I want to keep going back. It’s a five-roomed, meta-brilliant club run by just the best bunch of people and attended by a top crowd who dance lots and look ACE. I play in the Pop Bar, which is the top left hand room on this photo fact fans. Set times are at crackers o’clock, such is the Spanish way, starting at 3am. 3AM! That’s when most clubs are shutting in the UK. In Spain they’ve only just finished having their tea. 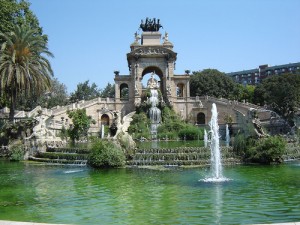 No, not the euro pop act (well not today anyway) but the splendid fountain in the Parc Ciutdella. First came across it on my second trip there on a beautifully bright sunny day and was somewhat dazzled by it’s MASSIVENESS and gold bits on the top. Do like a touch of gold upon a structure. That same day of discovery, I fell over on stage at Razz and broke my elbow mid-set (I carried on for 20 minutes! I SHALL NOT BE STOPPED) but the association isn’t tainted in anyway. Plus I’ve never fallen over since. Ok, I have, many times but not in an arm-in-sling mega-drama outcome anyway. 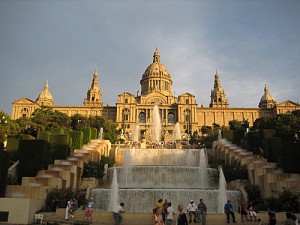 It’s a whacking great big mountain in Barcelona and atop of it sits a park, Joan Miro institute / Gallery, arenas from the 1992 Olympics and the above building which is the Museu Nacional d’Art de Catalunya. Or National Art Museum of Catalunya if you prefer. The latter is HUGE and contains all manner of visual delights going through gothic, romantic to modern periods in Catalan art. On the ground floor there’s one room (I say room, it’s the size of a football pitch) where they’ve installed the interiors of derelict churches from villages in Catalunya that the MNAC acquired and painfully reconstructed within the museum’s walls. ‘Tis truly remarkable and a lovely thing to do as otherwise they would have been knocked down, or left to ruin whilst loads of rats run amoc doing wees on the frescos. Instead they can be marvelled forever amen. 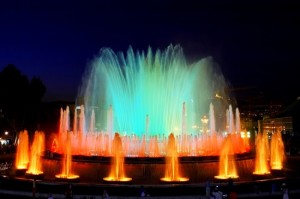 Oh and at the bottom of the hill (on the Plaça d’Espanya side) there’s the Font Magica which is a great big run of fountains. At night throughout the summer there is a show set to music by Abba and Jean Michel Jarre. I have never seen it and writing that down makes me wonder why the HELL not. Fountains dancing to Oxygene? Why haven’t I witnessed such a spectacle? AMAZING. 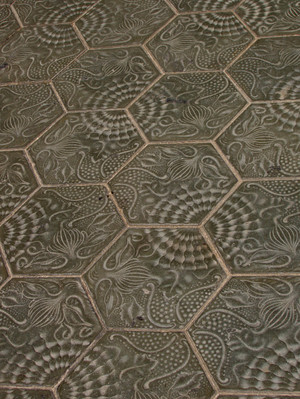 Making the ordinary lovely. Look at them. If our paving stones were as pretty as this, we’d never ruin them with chewing gum, fags and vomit would we? Would we? Oh we would. Oh well. 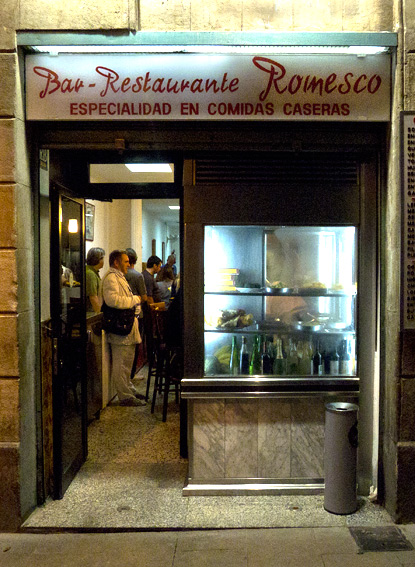 The name of a Catalan sauce made of almonds and tomatoes amongst other stuff, but also an ace cafe in El Raval just off Las Ramblas. It’s by no means glam; the waiters sort of bark at you, there’s strip lighting, but the food is just the best. They get most of their produce from the famous Mercat de la Boqueria which is just up the road and the menu is a no-frills but delicious fare of tapas, salads, meats and more. The sardines are the freshest and best I’ve ever tasted and cost about €3 for LOADS. Go there and eat them and DEFY MY SARDINE THEORY.

Whilst we’re on food, there’s also this: 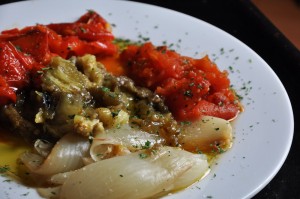 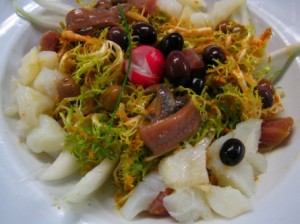 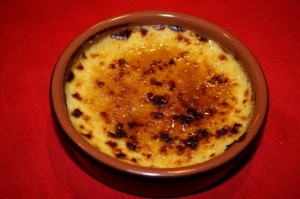 Crema Catalana – the Spanish (superior) version of crème brûlée. MEGA FIT. Always try to have at least one. Have been known to have two. They’re usually served in bigger, shallower dishes than what you get en France, which is ace if you’re greedy like me. Best one to be found at Mar de la Ribera in Born in my cakey opion.

These are some of the reasons why I love the Catalan capital. There are more, but to be honest I’ve rambled on enough and after all this food talk, I’m jeffing starving. 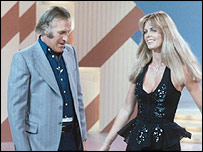 Many outdoors events this year have involved umbrellas and wellies or a combo of the two. That’s not a thrilling combo either. Thankfully a hot ball of yellow fire is once again riding high in the sky and yesterday’s BT River of Music gig at Battersea park was a glorious way to end a weekend of work, playing pop as the sun set to a group of enthused souls who stayed to dance until going home time. Let’s hope for all of us, our unworn summer wardrobes and the Olympics of course, that the rain doesn’t return. Them clothes need an airing for a start and  it will just look awful on the telly if the deluge makes a comeback.

This week I am mainly playing the role of hostess. This doesn’t involve fixing drinks or making dinners, which is good news as it’d mainly end up on the floor otherwise. No, it’s more about giving a twirl at the following: 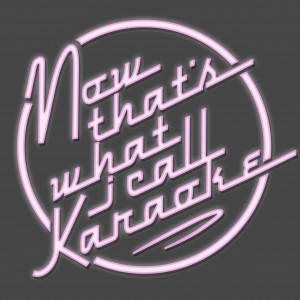 Starting tomorrow night at Concrete I’ll be rallying Tuesday revellers into stepping up to the mic for the bi-monthly Now That’s What I Call Karaoke nights as part of Concrete’s Karaoke East nights. Hip Hop Karaoke do one week and I the next. It’s a karaoke supperclub of sorts, as long as you like pizza, for that is the supper part.

Each one will have a theme of sorts, starting with Battle of the Sexes where pop legends shall be leading the charge in terms of the song selection and YOU as the star.

Starts at 7pm, pizza and arguing over who sings what at 7.30pm, then the stage is open for performing prowess from 8pm. You can book a table for tea (£15), or turn up just to sing (£5). I may be persuaded to sing myself. It doesn’t take much. I’m persuaded already. To be honest, it’s a worry whether I will allow anyone else a go. (I will) (Just one person though)

Then on Thursday I will be attempting athletic feats of compering at Time Out Live’s Alternative Opening Ceremony at London Wonderground. It’s the day before another opening ceremony happening in London that you may have heard about.

Featuring some of London’s top cabaret stars such as East End Cabaret, the Lipsinkers, Up and Over It and MORE – see here – they’ll be putting on a performance to dazzle any global audience. The pressure is ON when faced with the eyes of the world. One doesn’t want to fail, although bigger stars have at similar style events …

Luckily, there probably won’t be a billion people watching, for one they haven’t got enough chairs in the Spiegeltent, so a marginally smaller sized audience will see me fall off the stage in one of my multiple costume changes. Starts at 9.15pm. First tumble (in a gymnastic style) will be 9.17pm approx.

Then on Friday, I’m going to try and negotiate the possible travel meta-heck in our capital to fly out to Barcelona and play at the ACE Razzmatazz at daft o’clock in the morning to beautiful spanish boys with amazing hair. That doesn’t involve hosting though. That’s more about playing records and whirling. But with a Spanish flair. Well, crap GCSE Spanish, but a flair regardless… 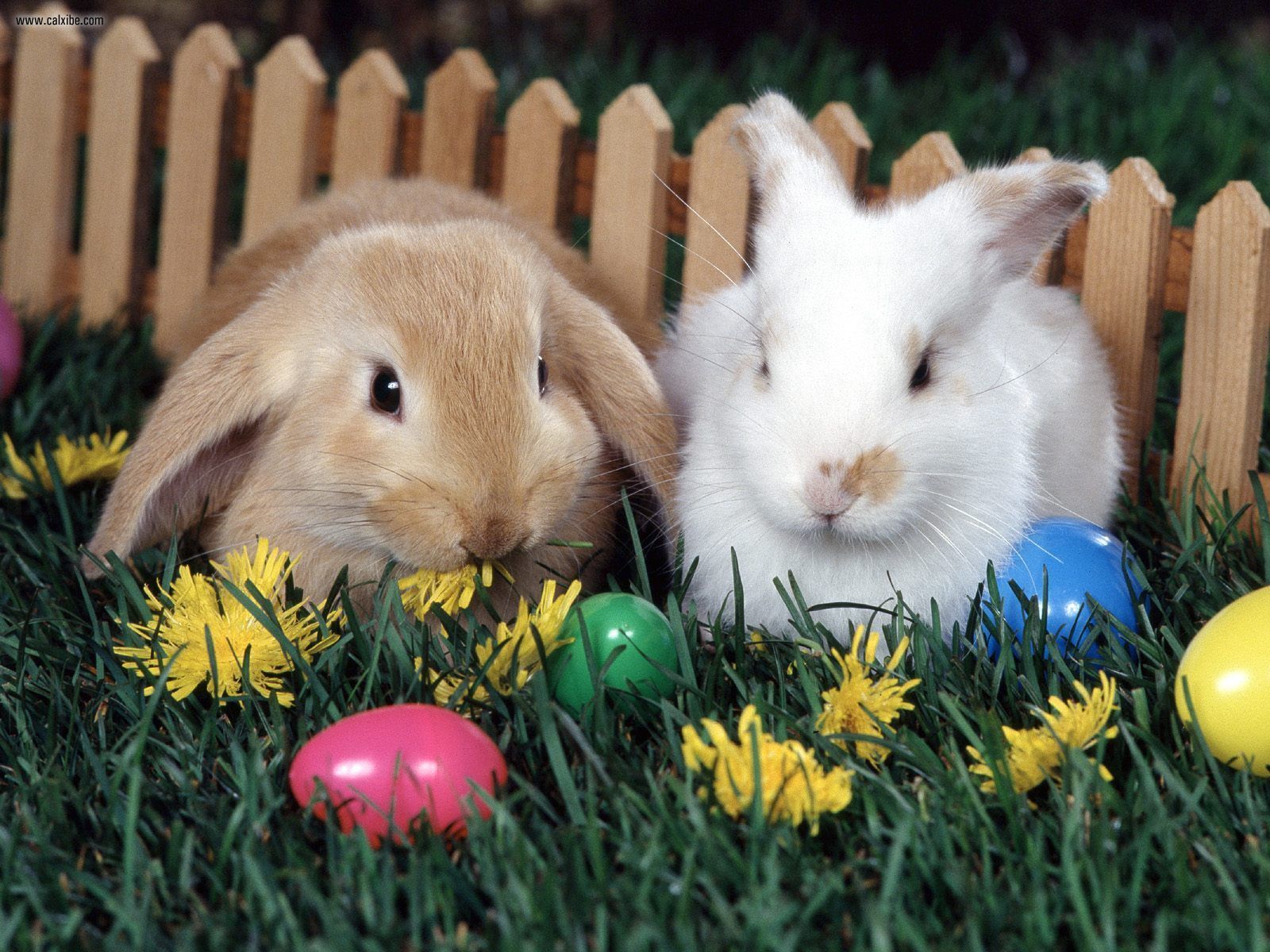 For next weekend’s Easter bank holiday, as well as mainlining plenty of these fellows: 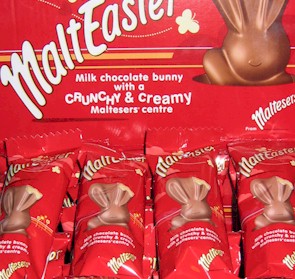 I’m going to be prancing about underground London town at The Old Vic Tunnels Easter Holiday Camp! That’s a holiday camp UNDERGROUND. Don’t worry, it’s not prison. It’s a secret multi-coloured magical land underneath the pavements of this here city, hidden below the grey pavements. A bit like when Dorothy steps into Oz.

There’s everything you’d ever want from a holiday camp – aside from a slightly lecherous lifeguard and some run down soft furnishings (although nor sure if you ever want the former) – including a bouncy castle, a boating pond with remote control boats (!), a meadow with deck chairs for relaxing and tennis and volley ball courts for the more sporting amongst us. I’m holding out for a knobbly knees contest too.

Alongside myself whirling around playing records, the Tootsie Rollers will be doing a turn in their super retro style.

Then on Saturday I’m flying off to Barcelona to play at Razzmatazz at crackers o’clock in the morning. With it being Easter weekend there’s probably some spectacular religious processions through the Catalan streets as they’ve got mad love for Jesus over there. 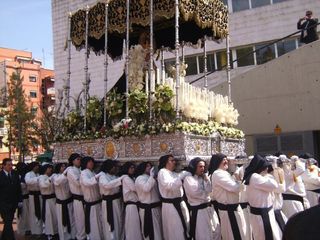 Bit worried about bumping into this lot. They’re not the bad guys, although it’s not immediately obvious from their get up